THE MOOD was angry and defiant at protests throughout California and across the country May 26 after the state Supreme Court announced its decision to uphold the Proposition 8 ban on same-sex marriage. In Los Angeles, where some 15,000 people took to the streets, chants of «Gay, straight, Black, white–same struggle, same fight!» and «No justice, no peace–equal rights now!» rang out into the early morning hours. Protesters held a rainbow flag with the words «These Colors Don’t Run, They Fight» written on it.

Elizabeth Schulte rounds up reports from around the country on demonstrations to protest the California Supreme Court’s decision to uphold a gay marriage ban. 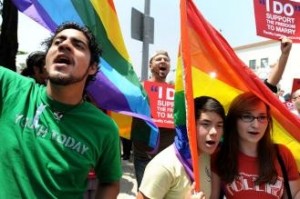 Some 15,000 people turned out in Los Angeles to show their anger with the court decision upholding Prop 8 (Robyn Beck | AFP)

THE MOOD was angry and defiant at protests throughout California and across the country May 26 after the state Supreme Court announced its decision to uphold the Proposition 8 ban on same-sex marriage.

In Los Angeles, where some 15,000 people took to the streets, chants of «Gay, straight, Black, white–same struggle, same fight!» and «No justice, no peace–equal rights now!» rang out into the early morning hours. Protesters held a rainbow flag with the words «These Colors Don’t Run, They Fight» written on it.

Thousands more turned out in other California cities–5,000 in San Francisco, 3,000 in San Diego–and across the country after the news emerged that the California Supreme Court had upheld the anti-gay referendum passed last November, even while deciding to recognize some 18,000 same-sex marriages that happened before the measure passed.

Robin Tyler and Diane Olson–two of the plaintiffs in the lawsuit decided by the California high court, who were married last year after 16 years together–were at protests in Los Angeles. Tyler, a founder of the Day of Decision Web site, which helped organize the protests nationwide, said in a statement:

Even though our marriage is preserved by today’s decision, we take no joy in the fact that marriage equality for almost everyone else has been removed from our state. The upholding of Proposition 8 by the court is a cowardly retreat from the pro-equality stance it took last year, and makes our state a laggard behind pro-equality states like Iowa and most New England states.

California should be following in the footsteps of states like Iowa, Maine and Vermont, which recognized equal marriage rights in the last few months, while the California Supreme Court was deliberating over Prop 8. Instead, the California justices voted 6-1 to uphold last November’s ballot initiative that denies same-sex couples the same rights as straight couples.

In May 2008, the same court ruled, in a 4-3 decision, that denying same-sex couples the right to marry amounted to state-sanctioned discrimination. Chief Justice Ronald George said that the court majority based its decision on a 1948 ruling that ended a California prohibition on interracial marriage–20 years before the U.S. Supreme Court did the same.

We therefore conclude that in view of the substance and significance of the fundamental constitutional right to form a family relationship, the California Constitution properly must be interpreted to guarantee this basic civil right to all Californians, whether gay or heterosexual, and to same-sex couples as well as to opposite-sex couples.

With the decision announced yesterday, George and the other California justices dodged this fundamental question of civil rights and hid behind a narrow legal question–whether Prop 8 is an amendment or a revision to the state constitution.

Under the California constitution’s equal protection clause, a majority of voters can’t revoke equal rights intended for everybody–a «revision» of that clause requires two-thirds approval in the legislature and then a popular vote. But the justices ruled that Prop 8’s language–defining marriage as a union «between a man and a woman»–was narrow enough to pass.

This is cold comfort to same-sex couples who are being told to accept separate-but-equal status. As the sole dissenting judge, Carlos Moreno, argued: «Granting same-sex couples all of the rights enjoyed by opposite-sex couples, except the right to call their officially recognized and protected family relationship a marriage, still denies them equal treatment.»

Prop 8 opponents also rightfully opposed the so-called «compromise» in the decision that sanctioned the 18,000 marriages of same-sex couples performed after the state Supreme Court overturned the previous ban and before Prop 8 passed last November. Plaintiff Diane Olson said that «half-measures accomplish nothing.»

EQUAL MARRIAGE supporters have been organizing for Day of Decision demonstrations for months. More than 100 cities had scheduled responses by May 26–protests or celebrations, depending on the Supreme Court’s decision.

— In San Francisco, shouts of «Shame on you!» rang out from about 1,000 people gathered at City Hall to hear the court’s decision when it was released at 10 a.m. From there, protesters marched to the intersection of Grove and Van Ness, led by the group One Struggle One Fight (OSOF), where 150 people took part in a civil disobedience action–holding hands and sitting in a circle–with around 250 people supporting them.

OSOF activist Seth Fowler explained that the group organized civil disobedience «to peacefully and nonviolently elevate the issue of marriage rights into popular consciousness, and to push a civil rights narrative into the mainstream so that it is not seen as merely a narrow gay issue.»

Another protest organizer, Ashley Simmons, said, «We chose to have a nonviolent civil disobedience because civil rights struggles come from the bottom up.» Fowler added, «There is a place for legislative action, but it’s more than appropriate to use civil disobedience to stand up for our rights when the system fails us.»

Later in the evening, 5,000 people turned out to a rally and march organized by Equality California. The demonstrators marched from the Civic Center to Yerba Buena Gardens. When police started to arrest a woman, protesters gathered around, and another march through the streets began–as about 1,000 people headed toward the Castro. There, some 300-400 people took part in a sit-in at Castro and Market.

Marchers, many of them young, were angry and focused on organizing the next step in the fight for marriage rights. «Every negative can be turned into positive,» said one protester. «This can be fuel to enlarge the fire.»

«This is just a stumble in the fight for equality for all,» said a marcher named Danny. «We will continue to march until this battle is won.»

— In Los Angeles, several protests took place on the Day of Decision. A demonstration organized by the Latino Equality Alliance in East Los Angeles at the county clerk’s office turned out 200 people, most of them young and Latino. A favorite chant was «Gay, straight, Black, white, marriage was a civil right.»

Lt. Dan Choi, who is being dismissed from the National Guard under the federal government’s «don’t ask, don’t tell» policy, spoke at the rally. «The time to ask for things is over,» Choi said. «It’s time to tell people what we want. Rosa Parks didn’t ask for civil rights. Dolores Huerta didn’t ask for labor rights.»

Organized labor was represented at the rally, with the LA County Federation of Labor’s Maria Elena Durazo featured as a speaker.

Later that evening, more than 15,000 people rallied and marched, the mood upbeat and angry. «I don’t get why Obama won’t come out for gay marriage,» said 17-year-old Rachelle. «What’s wrong with two people loving each other? The court decision is wrong. It makes me so angry. I brought my mom and little brothers and my aunt.»

Rachelle’s mother Norma added: «I’m here for equal rights. They can’t say 18,000 being married is okay, but not overturn Prop 8.»

Demonstrators Michael and Brian said they planned to go to the county administration building tomorrow with supporters. «Hopefully, we’re going to get out marriage license,» they said. «If not, we’re going to have a sit-in. We’re not going to leave until they give it to us. Prop 8 is not the cause of the problem. We have to go deeper than Prop 8.»

— In Seattle, where opponents of equal marriage are trying to get an anti-gay marriage initiative on the state ballot, some 1,500 people rallied downtown. Outrage over the California court’s decision was clear from the handmade signs: «Separate is never equal» and «What’s next, Prop 9? Separate drinking fountains for str8’s and gays?»

Chris, a Highline Community College student, said, «I’m out here today because I hate being a second-class citizen, and I want to be part of a movement for LGBT equality.»

The protest was organized by Join the Impact, Equal Rights Washington, Pride at Work, Stonewall Democrats and Queer Ally Coalition (QAC). Afterward, 500 people joined an impromptu march to a park in the LGBT Capital Hill neighborhood for a meeting called by QAC to discuss the next steps in the fight for full liberation.

— On the other side of the country, in New York City, as many as 5,000 people answered California’s Supreme Court ruling with an angry and spirited march that started at Stonewall Inn, the site of a 1969 riot that helped spark the gay liberation struggle of the 1970s.

Most people had heard about the protest only hours before, or joined in along the march route, but they wanted to send a message to Californians that this is New York’s fight, too. With a gay marriage bill passed in the New York State Assembly, but awaiting approval in the Senate, the urgency to demonstrate could be felt in the streets.

The lesson many took from the ruling today was the need to take the fight to the national level and build a movement to repeal the Defense of Marriage Act (DOMA) that bars the federal government from recognizing same-sex marriages performed in states where they are legal. «If we want change,» said protester Ed Davis, «we must fight for it. We can’t just wait to be saved.»

The New York march ended in Union Square, where one organizer summed up the mood: «This [ruling] didn’t scare me. This galvanized me.» Corey, another march organizer, spoke about the lessons of the civil rights movement: «Civil rights never won with a piecemeal, state-by-state approach. We need to fight for a federal law.»

— New York City was hardly the only place where solidarity with the fight in California ran deep.

MANY EQUAL marriage activists in California are looking to further their own ballot measure as a next step. The California secretary of state has given the group Yes on Equality until August 17 to collect some 700,000 signatures needed to qualify an initiative repealing Prop 8 for the 2010 ballot. Another measure would strike the word «marriage» from all state laws.

Equal marriage forces have a wide range of views on what kind of measures are needed, and whether we need more, or less, time to prepare. Some activists say that 2010 is «too soon,» and some fear a contentious referendum fight would hurt the Democratic Party’s chances in the elections.

But there has been a sea change in opinion nationwide since the wafer-thin 52 percent win on Prop 8 in November. A Washington Post-ABC News poll released last month reported nearly half (49 percent) of all Americans said they were in favor of legal marriage for same-sex couples, an increase of 13 percentage points since June 2006.

It would be a crime to fritter away the momentum created by a wave of states recognizing equal marriage.

And equal marriage activists can’t worry about «hurting» Democrats at the polls. Our demands will only be taken seriously if we put them first and build a struggle that is independent of any political party.